Text Colour contrasts (Part 2): How to choose the right colour combinations for my website?

In the first article about text colour contrasts, we looked into for whom it is important to have sufficient contrasts between a text colour and its background’s colour.

In this second article, we will be giving you a few leads to create graphical mock-ups compliant to the contrasts’ ratios expected for accessibility. Indeed, choosing colour combinations isn’t necessarily an easy thing; choosing the right accessible and readable combinations, even less. Thankfully, there are a few tools to help you choose those combinations.

When the colours of the company’s corporate identity are already defined, and you need to start the conception of a new website, or when creating a corporate identity, it is important to verify as soon as possible that the colour combinations for texts and backgrounds are accessible.

The Atalan company created a matrix for the contrasts’ analysis of a corporate identity (article in French), which is very useful and allows to avoid quite a few catastrophes.

In the screenshot of the above matrix, it is possible, for example, to identify if the following combinations are compliant for a AA level:

Tanaguru Contrast Finder is a tool suggesting valid contrasted colour depending on the chosen accessibility level.

It is an online tool that allows to select the text colour, the background colour and the minimum contrast ratio expected. (3:1, 4.5:1, 7:1).

Then, depending on your needs and if the contrast ratio is invalid, you may require for the tool to provide:

In both cases, the tool will provide either valid colours close to the original colour, or a range of valid colours.

An essential tool to test colour contrasts is Colour Contrast Analyser (CCA) by The Paciello Group. 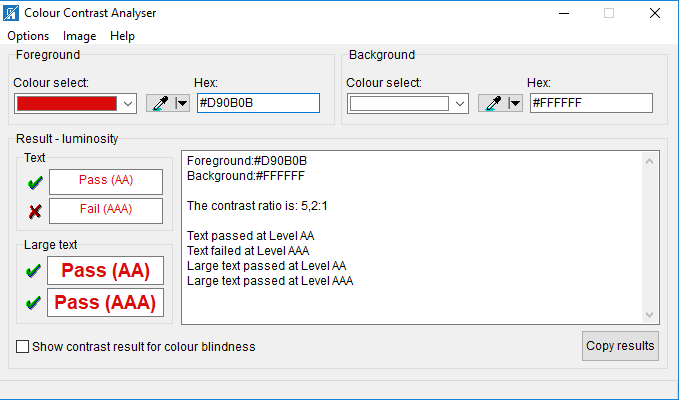 It is a very useful small software available for both Windows and Mac:

Managing the text contrast on or in images

Writing text on images is a habit often seen on the web.

If, at the beginning of the project, the graphists carefully chose background images with a sufficient contrast ratio between the text and the image zone behind it; it may unfortunately not be with such great care that the next image will be chosen to replace the original one.

Also, it is important to take into consideration that sight impaired people often zoom on the website’s tests to read it more easily. It may happen that a text placed properly until then on the image to be readable, would end up in the wrong place and become unreadable.

However, embedding text in an image is a trend that can be seen less and less. Indeed, with the accession of internet browsing on mobile, and therefore the birth of the responsive design, it is more and more complicated to use this implementation as the image then often becomes blurred or pixelated or even unreadable depending on the context. With this implementation of text embedded in an image, people zooming to better see the text end up not seeing it better and blind people don’t even have access to the information if there is no alternative text, etc.

Before all, it is important to know that:

There are a few CSS solutions to alleviate this issue:

In order to illustrate the difficulty that text on images may represent, here are a few examples that, originating from a good idea and good will, don’t fully satisfy the contrasts rule for text on images.

Example of a plain colour background behind a text

For example, Samsung, for one of its products’ dedicated site, chose to add, via a contrast improvement mechanism, a background behind most of its texts appearing on an image. Unfortunately, some texts seem to have been forgotten. 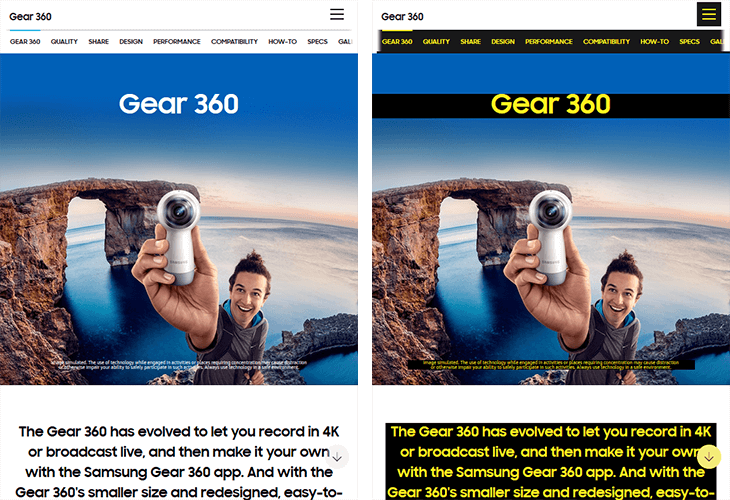 Example of a projected shadow behind the text

On their side, REI Co-op chose to make their text more readable directly by adding a slight projected shadow behind their text. Unfortunately, if the readability of the text is greatly improved, the contrast ratio isn’t sufficient everywhere. If, using the Colour Contrast Analyser eyedropper, you take the closest pixel in the lightest area (the waterfall), the ratio is only of 2.4:1 instead of 4.5:1.

However, increasing the opacity of this projected shadow wouldn’t change anything. Indeed, the issue of the projected shadow is that it is not completely unvarying all around the letters; here, there are letters entirely placed on the waterfall which colour is very light. Using another technique may be a better option to have full compliance.

Example of transparent background behind the text

On the website Dialogue & Solidarité, the carousel of the home page contains big images. The text is set on top of the images and rendered readable thanks to a see-through square (75% opacity) behind the text. In the example below, the text is dark grey. If you measure the background colour at the text level on the elderly woman’s hairs in the picture, the ratio is only of 2.8:1 instead of 4.5:1. In order to obtain a sufficient ratio, the background’s transparency should be at least of 90%. 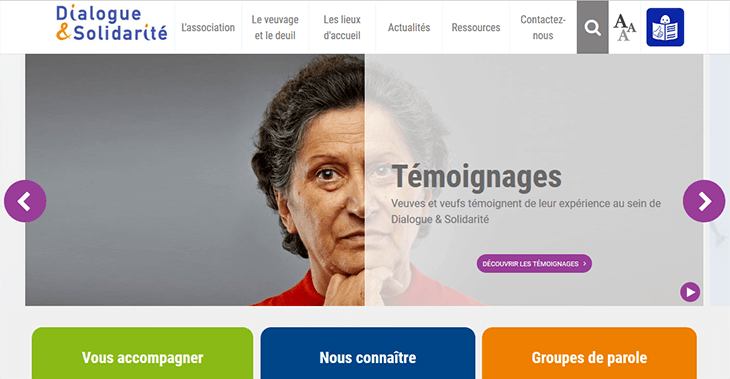 As a summary, it is possible to choose the right colour combinations for a website, so that the text colour always respects the ratio expected by the accessibility rules, depending on the colour of its background. However, it is best to take it into account beforehand as it would greatly facilitate the job. Numerous tools exist and can make things easier for us. Let’s use them as early as the graphical mock-ups phase.

If we think first off about the contents’ accessibility, text on images should definitely be used parsimoniously, or else, the way to ensure their readability, while keeping a coherent graphism, should seriously be thought through. It’s always more complex to get back on working on a validated graphical mock-up than respecting best practices from the start.

Additionally, let’s always keep in mind that content should not only be pretty, but, above all, it should be readable and understandable. Messages are best delivered when they can be read.