If a website doesn’t respect natively the contrast ratios or if the corporate identity created previously does not allow to respect them, the AA accessibility level allows to implement a contrast improvement mechanism to modify a webpage in order to make it more readable.

There are two solutions:

A technique for the colour switchers

In order to create a colour switcher, it is possible to use the CSS alternative style sheets functionality with a JavaScript component to activate the style sheets using buttons in the website.

To avoid CSS overloads and to avoid oversights of styling for some elements, with a CSS pre-processor like Sass, it will be possible, for example, to create two files containing the colour variables of the web corporate identity. The variables will have identical names but, in both files, their values won’t be the same: in the first file, it will be the original values, while in the second, it will be the enhanced contrasts values. Two style sheets will be generated: one calling all the Sass files with the first variables’ file, the other calling all the Sass files with the second variables’ file.

Here is for example the content of a first file with “normal” variables (in Sass), which could be called “_variables-identity-colors.scss”:

And the content of a second file with high contrast variables, which could be called “_variables-identity-colors-high-contrast.scss”:

In this case, there will be two Sass files of colour variables to import separately and the other Sass partials. The Sass files will be calling all the partials that will distinguish which variables’ file should be called.

The file for high contrast “styles-high-contrast.scss”:

With the compiler from Sass to CSS, an error will appear if a variable is missing in one of both files of variables. Thus, there is no risk of oversight on that part. However, if another Sass partial is created, it is important to add it in both “styles.scss” and “styles-high-contrast.scss” files. The contrast improvement mechanism should, of course, be integrated to the tests processes for each newly developed functionality.

In the HTML code, in the <head> tag, both alternative style sheets will be called:

Then, two buttons (<button type="button">), that could be called “High Contrast” and “Default Contrast”, will allow to switch in JavaScript between both style sheets.

Remember, of course, to save the users choice in browser cookies so that it is kept each time the user reloads the page or moves to another page.

It is then easy to create other style sheets with different colour themes. Thus, if the website uses vivid colours like a bright pink for example, or a yellow that’s a bit fluorescent, and that could bother the users with sensorial issues or on the autism spectrum, it will be possible to offer a style sheet option with less vivid colours. This isn’t required by the accessibility guidelines but, still, it may be useful.

In addition to this article, here is an example of a colour switcher available on our Github page. You can also go and see the demonstration. 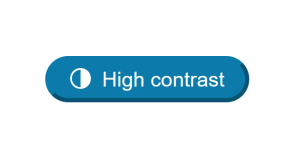 Shape and position of a contrast improvement mechanism on a website

The RGAA (Référentiel Général d’Amélioration de l’Accessibilité, the French Reference Document for the Improvement of Accessibility) lacks indeed of precisions concerning the use of this mechanism. It doesn’t mention the place or the method with which it should be implemented, which makes it sometimes unusable.

However, the 2017 update of the RGAA, added an essential point, compliant to the WCAG: the mechanism should itself respect the minimum contrast ratio. Thus, users needing high contrasts are sure to be able to find the contrast improvement mechanism.

In the WCAG, the G174 technique: “Providing a control with a sufficient contrast ratio that allows users to switch to a presentation that uses sufficient contrast” adds another important element: the mechanism should be placed in a visible manner so that users may access it easily. At the same time, if this point is combined to the G136 technique “Providing a link at the beginning of a nonconforming Web page that points to a conforming alternate version”, it seems obvious that the element should be placed in the page’s header.

More and more organisations are concerned by accessibility issues. There are of course a great number of institutional websites or websites dedicated to disabilities, but not only. Some companies like Samsung already use this contrast mechanism. Note that, unfortunately, until now, many sites implementing this kind of tools often miss out some texts in the mechanism.

To analyse the different implementation possibilities of the mechanisms, we gathered examples to evaluate the existing solutions. At the same time, we created a shared document listing websites using a contrasts’ improvement mechanism.

This list shows there are numerous methods to integrate a contrasts improvement mechanism to a webpage. This diversity is an issue as, if someone needs strong contrasts, they need to be able to identify quickly the solution in order to activate it. If each site has its own method, it becomes quite difficult to find its way around. Besides, implementation methods are more or less approximate.

A few rules that could be established

It is strongly recommended:

Specifying how the mechanism works in the accessibility page of the site, if it exists, would also be good practice.

Buttons activating the contrasts mechanisms are often equipped with an icon. The following icons are the most recurrent:

Whatever the chosen icon for the contrasts improvement button, it is strongly recommended to associate an explicit and visible label as for example “contrasted version” or “high contrast” so there won’t be any doubt on the buttons use and for it to be found more easily. Being able to look for the word “contrast” in the page and, thus, finding the mechanism would surely be much appreciated.

During the maintenance or the site evolution, remember to update, if necessary, the style sheet associated to the contrasts’ improvement mechanism.

In short, what is there to remember on the colour contrasts’ rules?